Mine was stolen right outside my door in a locked building. Apparently, for the three years this place has been open, mine is THE only crime ever reported.
Naturally.

So, my friend Jano rebuilt a bike and gave it to me. Bikes are like horses. My Giant was my trusty steed. It fit perfectly through seven years and about 2,800 miles.

I have a new horse and it's hard to get used to. It's an old bike and a bit heavy. I can't find a seat adjustment that works well, so this one chaffed me serious yesterday while I took it out for a decent ride. Somewhere along the way I lost my higher gears which allowed me to move quickly on flat or inclines. For some reason I only have about four speeds and that won't cut it for a long distance ride.

I could take it to the bike shop for repairs but I have a feeling I'll have to trade in this one for a a type much more suited to what I was used to.

I had an Appaloosa, not trading that for something else only makes the ride harder. 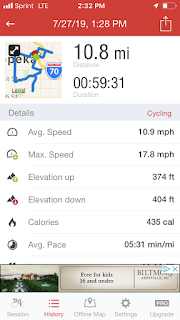